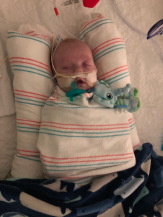 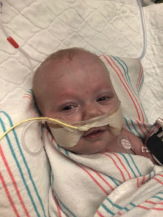 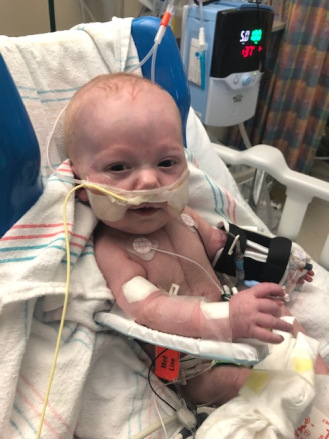 Today is day 46 in the hospital. Daniel was admitted on October 25th. He had a heart cath procedure in which they measured the pressures in his lungs and heart and attempted to balloon his narrowing aorta on October 26th. He had his Glenn (and aorta patch) on November 13th. He had his diaphragm plication on December 4th. And here we are today.

He spent roughly 18 days intubated of the 46. He had to be re-intubated twice. They finally figured out he had a paralyzed diaphragm, which was exacerbating all of his lung issues–respiratory distress, increased secretions despite antibiotics, etc.

Y’all…this surgery (the Glenn) was supposed to be the easy one! Babies are usually in and out of the hospital in a matter of days. Not Daniel, though. My sweet little miracle boy always has to do things his own way. He was born six weeks early with half a heart, and he has had his own timeline from day one. Five surgeries in four and a half months. Friday he turns 5 months old.

Now that his diaphragm has been addressed, Daniel has made steady forward progress. He is getting frequent “pulmonary toilet”– CPT, albuterol, deep suction, hypertonic saline every four hours. In the three weeks from the Glenn while his diaphragm was paralyzed, he accumulated a lot of secretions, and they are trying to help him clear it. They are slowly weaning his oxygen support, going down by .5 liters every twelve hours. He is also off all of his IV drips, and they are working on transitioning his diuretics to PO (by mouth/g-tube) instead of IV. All of this is great news! As soon as Daniel is on low flow oxygen and is off IV meds, he can come HOME. We are probably going to be moved rooms to a different pod, too. I’ll have a bathroom and shower in Daniel’s room.

(Daniel is pictured here in a mamaroo swing. The respiratory therapist is giving him his albuterol treatment. Here Daniel is smiling at her.)

This has been such a long road. I have learned so much, and I have grown. I have had to really get to know myself. When I am running around home, corralling my young children, teaching five different classes, trying to keep my house clean and food on the table, it is really easy to just go on autopilot and go through the motions without thinking. Sitting bedside for 98 total days with nothing to do but pray and wait…it has forced me into introspection.

Now I know when I have had too much, and I retreat home. I am so thankful Brian can work from the hospital so he can stay with Daniel while I am recharging. I have learned there is no such thing as “Power Through.” When I get to the point where I feel hopeless, everything moves slowly. I feel like I blink, breathe, walk, think as slowly as a snail. It feel like an elephant is on my chest. I feel buried alive. When I was a kid, I would dive down in a deep pool and lay on the bottom of the pool and look up. That’s how I feel–like I am at the bottom of a twenty foot pool, pressure pushing in on my head, eyes, and ears…immobilized and unable to swim to the surface. When that happens, I must go home.

Part of the allure of home is that I feel productive there. My kids have a great knack for strewing their toys EVERYWHERE, laundry needs to be done, and food needs to be prepared. I spend my time playing with the kids, picking up the house, cooking, and getting them ready for bed. It is so nice to be able to do something. The itchy feeling I feel in my soul subsides just a little bit.

It is also a struggle to go home. When I am doing normal “mom” things, it becomes so evident that I have been largely absent from David and Hannah’s life for six months. The responsibilities of day-to-day care for them have largely fallen on my parents. David fixed his toy on his own the other day by finding a screwdriver and replacing the batteries all on his own. He asked me, “Mommy, why does Santa bring presents if Christmas is about Jesus’s birthday?” and “Do you remember that bat we found in the car port last year? Wasn’t that frightening?” Hannah is a budding actress and artist. She told me my mom’s shirt color was “cyan” the other day. She will do anything for a laugh, and she is completely able to hold a conversation now. I look at them and wonder when they grew up so fast. There is nothing I can do to “fix” this situation. We are all just in survival mode.

Another part of the allure of “home” is I don’t have to talk to anyone. Everyone I am exposed to knows exactly what I am going through. My mom, my aunt, my dad, my kids–they all get it. They are with me in this. But when I go into public and talk to other people….that’s when it gets problematic.

I took David to get his hair cut yesterday. The lady cutting his hair asked me, “Is he your only child?” I dread this question. When I share what we have been through to others, it sounds overwhelming. Putting it all into words to someone who doesn’t know us…it makes it all more insane, for some reason. I was tempted to just answer, “Yes,” but I felt that was wrong somehow, so I was honest. I am not trolling for sympathy when I share with people. I just want to honor Daniel’s struggle. He is real. He is a human being. He is alive. To deny him, even for the sake of simplicity, just feels wrong. I told her about Hannah and Daniel, including all the stuff we have been through since his birth. It is still unbelievable in so many ways. Why did this happen? Why can’t it all just be over?

I am increasingly feeling cut off from people. I wrote about isolation I felt when I was awaiting Daniel’s birth in June while in Houston alone in the RV. At that time, I was lonely because I was cut off from everyone. I wanted company. I wanted to just be around people. Now, however, I feel isolated when I’m in a big group.

When people talk about things that they are worried about, I just can’t relate. So many of the things people worry about seem so silly. I don’t mean to downplay your pain or struggle. I can’t stand it when people act like it is only their pain that matters, as if they have won the pain contest or something, so that is NOT what I am trying to do in this post. My pain is not the only pain that matters. I am writing this blog to give voice to others who are going through something similar. I am hoping that reading this, understanding a bit of what is going on in my head and heart, will help all of you relate to others around you who may be hurting. I just want to give all of you a little bit of perspective.

People who act like Donald Trump is the reincarnation of Hitler and people who act like Donald Trump is the second coming of Jesus Christ– I am exhausted by you. Politics matters, and I know you feel the urgency to do something about it, and I encourage you to be active in the political process. But if all you do is post political memes…I just can’t relate. Here I am watching my son fight for his life day after day, and you are worried about power-hungry politicians who have successfully tricked you into believing they care? Here is a news flash– none of them care! They are all just looking to profit from a divided nation. Vote your conscience, research and talk about the issues with other people who are intellectually curious. But please stop with the incessant posting of political propaganda. There are people hurting around you who need you.

I attended TJ’s funeral on Saturday. I mourned for a baby who was the same age as Daniel. I watched my friend T weep for her baby who suffered greatly and died, knowing I may have to be in that exact same position one day. TJ died all of a sudden. One day he was making progress, and the next day he was swollen beyond recognition. One day they were talking about going home one day, and the next day they found out he had something wrong in his head, something they couldn’t have known about before it happened. Sitting there at that funeral was surreal. It was like a big slap of reality in my face. Something T said was how hard it has been to adjust back to real life. She lived in this hospital for two months with TJ. She never left his side. Now she has to adjust back to life outside the hospital. How in the world is she supposed to go on with her life after TJ, after these trials she has endured by his side? When other people are stressing about their kids’ nap schedules, fretting over the migrant caravan, feuding with their mother-in-law because they have too many places to spend the holidays, stressing about their jobs, talking about how tired they are–how in the world are we supposed to relate to these people?

I don’t mean to sound bitter. I am really, REALLY not. I just spoke to a mom whose 16-year-old daughter attempted suicide. It has been three days, and they just have to wait to see if she wakes up. They don’t know if she ever will, and even if she does, she may have brain damage or have irrevocably damaged her liver and/or kidneys. There is so much pain, so many people who need you. For so many years I walked around caring about things that don’t really matter. All the things that worried me before, now I realize it is all in God’s hands. The things I cared about– my political affiliation, my college football allegiance, my identity as a Texan–somehow, for me, they became ideas that pigeonholed me. I saw people by labels– are you with me or against me?  When we label ourselves as Republicans or Democrats first, when we isolate ourselves in our own little worlds and forget that there is real pain around us, we miss our opportunity to make a REAL difference.

When they called for people to share at TJ’s funeral, I read Romans 8:35, 37-39 and shared that TJ is victorious in his fight because of JESUS. TJ made a huge impact on me, and I will never forget him. I felt like I had to stand up and say something in his memory, and I wanted to encourage his family, share with them the only One who has the power to heal their hurt. I had the opportunity to hold a devastated mother’s hand and pray with her as she waits for her precious, hurting daughter to wake up. Our mutual pain has broken down all walls that once would have divided us. The only thing I see now is a human being who needs to hear the incredible news I have to share– that “overwhelming victory is ours through Christ, who loves us” (Romans 8:37) and that “nothing in all creation will ever be able to separate us from the love of God that is revealed in Christ Jesus our Lord” (Romans 8:39).

Do me a favor today. Hug your children. Listen to someone who needs a shoulder to cry on. Pass on a random act of kindness. Don’t pre-judge someone. Stop worrying. Pray and, most importantly, give thanks.

Peace of Mind and Heart

State of the Geigers– February 2019